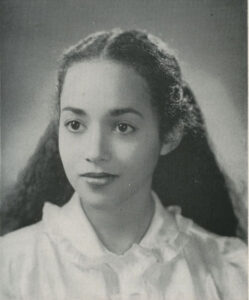 Scribner Library’s Jane Kjaer has spent the past few years deeply enmeshed in researching the history of women at Skidmore College, first with her work with librarian Barbara Norelli on the very popular One Hundred Years Ago: Skidmore & the Suffrage Debate exhibit in the library in 2017, then with faculty Katherine Graney & Natalie Taylor’s 2020 Never Done class, resulting in the online exhibit We’ve Only Just Begun: 100 Years of Skidmore Women in Politics exhibit at the Tang that pulls from Scribner Library’s archival holdings:  https://tang.skidmore.edu/exhibitions/284-we-ve-only-just-begun-100-years-of-skidmore-women-in-politics .

One of the women highlighted in this  exhibit is Mia Mouzon McCoy ’47, who founded a chapter of the NAACP while at Skidmore and became one of our first US born women of color graduates.  Mouzon McCoy grew up in what is now the Mouzon House restaurant in downtown Saratoga Springs, which is named in her honor.  Kjaer is currently working on research for an exhibit about Skidmore’s World War II hero Elizabeth Fisher Adams ’29, who drove an ambulance behind enemy lines and is still honored in France every year for her bravery in service to the people of France and for her work with the Freedom Train during the war.